Munich Re maintains stable dividend and continues to grow 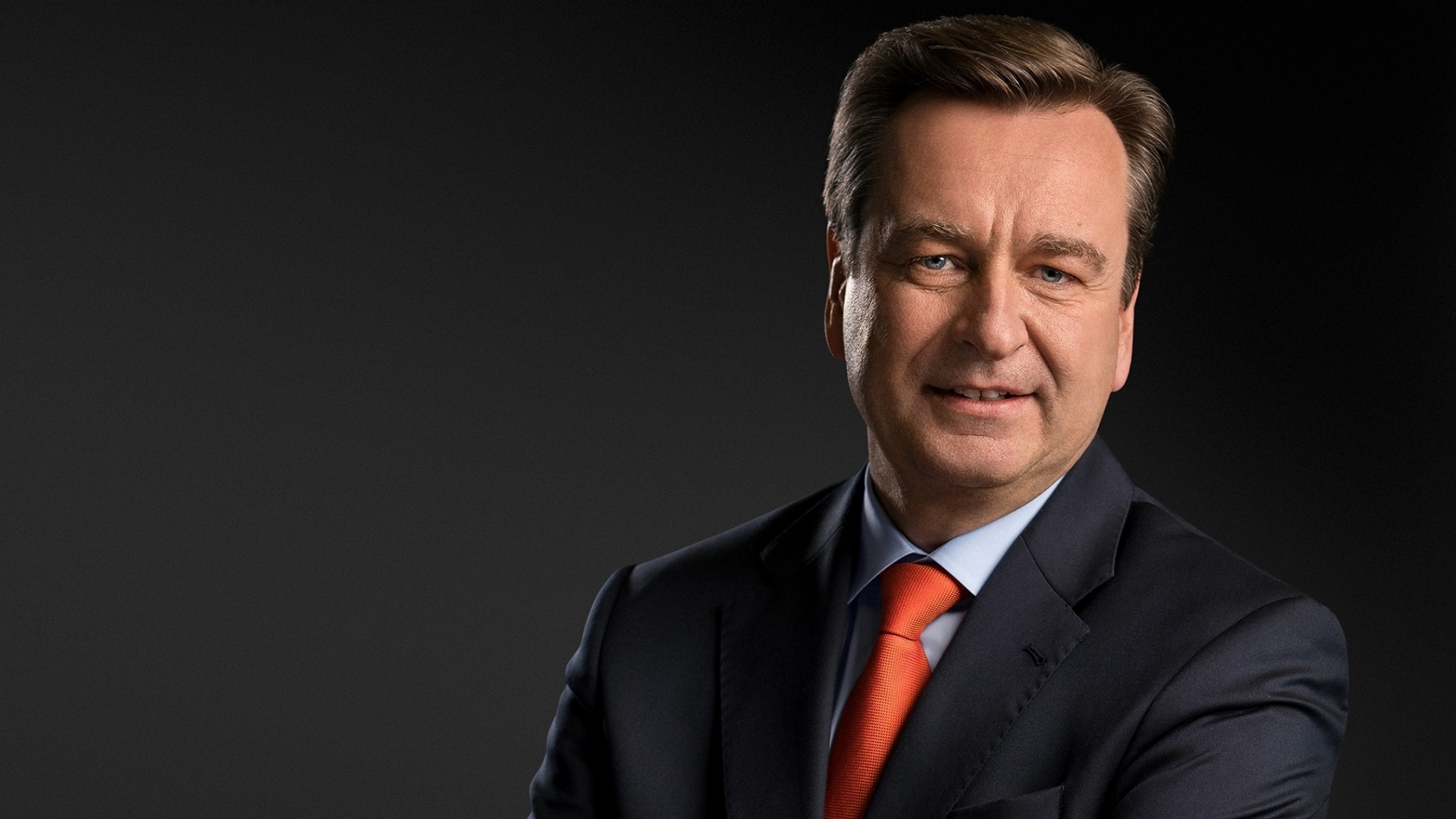 In spite of the tremendous challenges posed by COVID-19, Munich Re closed out 2020 with a clear profit – and our dividend remains dependable. In 2021, we expect to meet the profit target that we envisaged prior to the pandemic. All the pieces are in place. Our reinsurance business is ideally positioned to resolutely exploit opportunities for profitable growth in the improved market environment. And ERGO is performing well following the successful conclusion of its Strategy Programme. We are refraining from launching a new share buy-back programme at this time, because our shareholders will benefit more from investments in the attractive business opportunities now emerging.
Joachim Wenning
Chairman of the Board of Management

Summary of figures for the 2020 financial year

Munich Re generated a profit of €1,211m (2,707m) in 2020, and €212m (217m) in Q4. The 2020 financial year was marked by high losses in connection with COVID-19. In reinsurance, pandemic-related losses totalling €3.4bn were posted, of which €370m was attributable to life and health reinsurance, and slightly over €3bn to property-casualty reinsurance. At ERGO, the negative impact on the result arising from COVID-19 totalled €64m. Adjusted for the above-mentioned losses, the Group would have met its originally envisaged 2020 profit target of €2.8bn, which was retracted in March 2020.

Life and health reinsurance business generated a profit of €123m (706m) in 2020. Premium income increased to €12,707m (11,716m). The technical result, including the result from reinsurance treaties with non-significant risk transfer, amounted to €97m (493m).

Major losses – in excess of €10m each – totalled €4,689m (3,124m) for the full year, and €1,191m (1,462m) for Q4. These figures include gains and losses from the settlement of major losses from previous years. Major-loss expenditure corresponded to 20.8% (15.2%) of net earned premiums, and was thus considerably above the long-term average of 12%. This was primarily attributable to major losses associated with the coronavirus pandemic. In this context, the most significant losses were incurred in connection with the cancellation or postponement of major events. On a smaller scale, there were also losses in other lines of property-casualty reinsurance, including business interruption. These and other man-made major losses added up to a sizeable €3,784m (1,071m). Major losses from natural catastrophes cost €906m (2,053m), which was far lower than expected on average – despite a record number of events in some loss scenarios. The costliest natural catastrophe for Munich Re in 2020 was Hurricane Laura (approx. €280m).

In the 2020 financial year, provisions for basic losses from prior years totalling around €938m were released; this corresponds to 4.2% of net earned premiums. Munich Re continually seeks to set the amount of provisions for newly emerging claims at the top end of the estimation range, so that profits from the release of a portion of these provisions are possible at a later stage.

In the reinsurance renewals as at 1 January 2021, Munich Re was able to increase the volume of business written to €11.6bn (+10.9%). Around half of property-casualty business was renewed, with a focus on Europe, the USA (mainly excluding hurricane cover) and global business. Prices, terms, and conditions improved; rates increased particularly in parts of the non-proportional business. Prices improved to varying degrees around the world. All in all, prices for the Munich Re portfolio increased by 2.4%. This figure is, as always, risk-adjusted. In other words, price increases are offset if they are associated with increased risk and, consequently, elevated loss expectations. Looking ahead to the upcoming renewal rounds in April and July, Munich Re anticipates that the market environment will remain positive and offer attractive growth opportunities.

Munich Re generated a profit of €517m (440m) in its ERGO field of business in 2020, and €136m (101m) in Q4. This means that ERGO successfully completed its Strategy Programme, nearly meeting its 2020 profit guidance of €530m – the burdens arising from COVID-19 notwithstanding.

This result was buoyed by the ERGO International segment’s very high result of €230m (105m). Three factors contributed to this achievement: a renewed improvement in operational business, a positive one-off effect as part of the merger of two joint ventures in India, and the fact that the previous year had been burdened by the optimization of the international portfolio. The ERGO Property-casualty Germany segment generated a profit of €157m (148m), chiefly owing to strong premium growth and a good technical result. The impact of COVID-19 was cushioned by lower major losses. ERGO Life and Health Germany reported a result of €130m (187m). This decline occurred primarily on account of the lower investment result in the health field and the impact of COVID-19 in travel insurance. ERGO’s operating result amounted to €1,002m (817m).

Overall premium income across all lines fell only slightly to €18,448m (18,880m), despite international portfolio remediation and the repercussions of the pandemic; gross premiums written decreased to €17,569m (17,650m).

Munich Re’s investment result (excluding insurance-related investments) decreased to €7,398m (7,822m) in 2020. Regular income from investments fell to €6,273m (6,751m), largely due to lower interest income. The balance of write-ups/write-downs amounted to –€1,957m (–309m), particularly on account of impairment losses on equities triggered by the Q1 plunge in equity markets. In addition, net gains on disposals excluding derivatives increased to €3,698m (2,779m), driven by the sale of fixed-income investments, equities and real estate. The net balance of derivatives amounted to €74m (–717m), with gains on interest-rate derivatives and losses on equity derivatives nearly offsetting each other.

Overall, the 2020 investment result represents a return of 3.0% on the average market value of the portfolio. Munich Re thus managed to achieve its target – in spite of the challenging conditions and high volatility prevailing in the capital markets. The running yield was 2.5% and the reinvestment yield was 1.5%. The equity-backing ratio, including equity derivatives, dropped to 6.0% as at 31 December 2020 (31 December 2019: 6.4%).

The Group’s asset manager is MEAG, whose assets under management as at 31 December 2020 included not only Group investments but also a volume of €69.6bn (38.2bn) for third parties.

Munich Re is aiming for a profit of €2.8bn in 2021, as communicated on 1 December 2020. The Group expects the financial consequences from COVID-19 to be on a considerably smaller scale than in 2020. Group premium income is expected to rise to about €55bn in 2021, and return on investment to be above 2.5%, the persistently very low interest rates notwithstanding.

In its reinsurance field of business, Munich Re anticipates premium income of about €37bn and a profit of about €2.3bn in 2021. The combined ratio in property-casualty reinsurance is forecast to be about 96% (95% without burdens arising from COVID-19). Munich Re projects a technical result, including the result from reinsurance treaties with non-significant risk transfer, of about €400m in life and health reinsurance.

It is anticipated that the ERGO field of business will contribute about €500m to consolidated profit. ERGO is targeting a combined ratio of 92% in the Property-casualty Germany segment (91% without expenditure for COVID-19), and 93% in the ERGO International segment. Premium income will amount to approx. €17.5bn in 2021.

All forecasts and targets face considerable uncertainty owing to fragile macroeconomic developments, volatile capital markets and the unclear development of the pandemic. As always, the projections are subject to major losses being within normal bounds, and to the income statement not being impacted by severe fluctuations in the currency or capital markets, significant changes in the tax environment, or other one-off effects.

Munich Re is one of the world’s leading providers of reinsurance, primary insurance and insurance-related risk solutions. The group consists of the reinsurance and ERGO business segments, as well as the asset management company MEAG. Munich Re is globally active and operates in all lines of the insurance business. Since it was founded in 1880, Munich Re has been known for its unrivalled risk-related expertise and its sound financial position. It offers customers financial protection when faced with exceptional levels of damage – from the 1906 San Francisco earthquake through to the 2019 Pacific typhoon season. Munich Re possesses outstanding innovative strength, which enables it to also provide coverage for extraordinary risks such as rocket launches, renewable energies, cyberattacks, or pandemics. The company is playing a key role in driving forward the digital transformation of the insurance industry, and in doing so has further expanded its ability to assess risks and the range of services that it offers. Its tailor-made solutions and close proximity to its customers make Munich Re one of the world’s most sought-after risk partners for businesses, institutions, and private individuals.